<< Back to News Listing 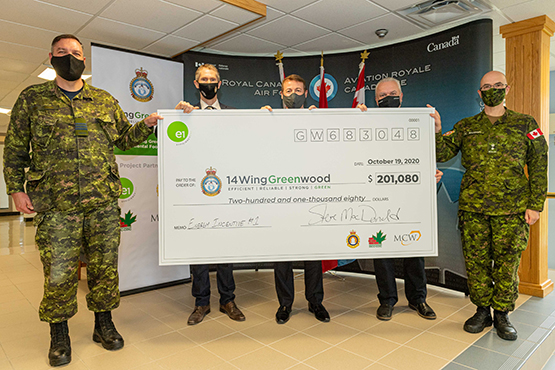 14 Wing Greenwood marked a milestone in the implementation of an Energy Performance Contract at the base on Monday, October 19th 2020. This milestone included completed energy saving measures at 23 of the 60 buildings included in the EPC, and proven energy reductions of approximately 1,700,000 kWh. That’s a greenhouse gas reduction of over 1,100 tonnes of eCO2 – equivalent to taking nearly 260 homes “off the grid” and 340 passenger vehicles off the road!

Construction will continue at 14 Wing Greenwood and Support Base Aldershot until March 2021, and savings are expected to increase to an annual energy cost reduction of $898,000, or 13 per cent, and lower greenhouse gas emissions by close to 7,500 tonnes CO2 equivalent per year.